Ocala cardiologist Dr. Srisha Rao is so passionate about people becoming heart healthy that she’s willing to risk going out of business to achieve her goal. 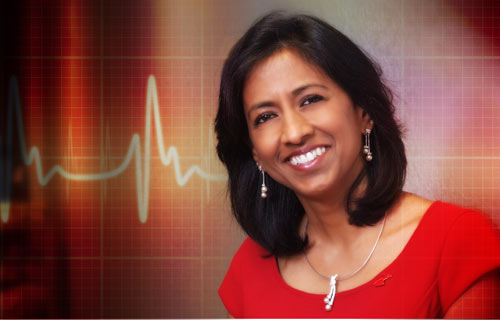 Up at 4:30am and in the gym by 5:00am, Rao gets her heart-thumping day started with an invigorating workout. She’s going to need that energy boost to get through her usual 12-hour day of seeing office patients and making hospital rounds. And to keep her fueled throughout her hectic schedule, Rao keeps her cozy corner office stocked with good, nutritious food. There’s a jar of unshelled peanuts, a bag of tangerines, and ready-to-drink protein shakes in the mini-fridge.

“Outside of hereditary factors, heart disease is prevalent today because of our lifestyles,” says Rao. “There’s too much stress, too much overeating, and not enough activity. The good news is that we can change our lifestyles and have healthier hearts. Yes, medication also plays a role in treatment, but lifestyle changes are a necessary complement.”

A conversation with Rao is infused with her passion for her work, accented with smiles and laughter. And yet, this petite woman has a reputation as a bit of a health bully.

“My nurses tell me that sometimes I pick on my patients too much,” she says, smiling. “But it’s because I care about them and want them to be healthy.”

Acknowledging that lifestyle changes are not easy, Rao believes anything is possible.

“I’ve found that just telling someone they have to eat better and exercise more doesn’t always resonate, even if you tell them that they’re going to die if they don’t,” she says. “You have to appeal to people not only in a logical way, but emotionally as well. If I tell them they need to make changes so they can be around for their grandchildren, then they’re motivated.”

Rao is well aware of the influence family can have on a person. Growing up in southern India, she was not lacking in career role models—her father was an engineer and her mother was a doctor. Rao enrolled in medical school at 17.

After earning bachelor degrees in medicine and surgery from Gandhi Medicine College at Osmania University in Hyderabad, A.P., India, Rao moved to New York City. While completing her residency in internal medicine at the Catholic Medical Center, she was inspired by several instructors to pursue a cardiology career.

“Cardiology appealed to me because it was an exciting field that was evolving,” says Rao. “I thought this would be a field of medicine where I had a chance of making a difference in people’s lives.”

With her board certification in cardiology approaching in 1997, Rao began thinking of where she wanted to practice. And she knew it wasn’t in New York City.

“I was looking for a place with peace and quiet, warmth, and sunshine,” she says, laughing. “I had had enough noise and cold. I feel like it was destiny that I ended up in Ocala.”

As it turned out, Rao had a friend whose brother was a cardiologist in Citrus County. At her friend’s urging, she called him up and essentially asked for a job. Not able to offer her one, he referred her to Dr. Ramulu Eligeti in Ocala and the latter invited her to visit.

“I came to Ocala in January and it was in the 70s. I loved it!” recalls Rao. “Then Dr. Eligeti gave me a tour of Munroe Regional and Ocala Regional medical centers. I couldn’t believe that these two hospitals were within walking distance of each other. At that point, I would’ve paid Dr. Eligeti to give me a position.”

Told of Rao’s willingness to bribe him for a job, Dr. Eligeti laughs and says, “As soon as I met her, I knew Dr. Rao was going to be fine doctor and a great asset to our practice. She’s definitely lived up to the promise I saw in her.”

Sans bribing, Dr. Eligeti hired Rao and she moved to Ocala in July 1997. Her husband, Dr. Sushil Puskur, made the move after graduating from Columbia and enrolled at the University of Florida to complete his graduate work in child psychiatry.

Now a partner for 10 years at the Cardiovascular Institute of Central Florida, Rao has recently and happily been joined by Ocala’s second female cardiologist, Dr. Hima Mikkilineni.

While her patients include both men and women, Rao has taken on a special mission for her gender. In 2007, she became the inaugural medical ambassador for MRMC’s Women in Red program, which was created to provide women with the facts about heart disease and to promote heart health.

“Women are generally the caretaker in the home,” adds Rao. “But I tell them that they have to take care of themselves first before they can take care of everyone else.”

For Dr. Rao, there is no greater gratification than seeing her patients, both men and women, getting healthier.

“I want my patients to feel better and be happy,” she says, then with a smile adds, “even if everyone being healthy means me going out of business. It would be worth it.”